We are thrilled to announce the appointments of Kathryn Knowles, accomplished composer, cellist and active conductor of Music4life String Orchestra, AND Donovan Seidle, Assistant Concertmaster of the Calgary Philharmonic Orchestra, to our board of directors.

Kathryn Knowles is a composer, cellist, and writer based in Toronto, Ontario. She holds a Bachelor of Music and a Master of International Business from Queen’s University, as well as a Master in Music Composition from the University of Toronto where she was awarded the Joseph Armand Bombardier Canadian Graduate Scholarship. Her works have been played in workshops by the Toronto Symphony Orchestra, the New Orford String Quartet, and the Penderecki String Quartet, and she received honourable mention in the Writer’s Digest 89th Annual Writing Competition for her poem, Beyond the Black Horizon’s Crease, and her short story, Lester’s Bird Feeder. Her piece Biarc was commissioned by Accordion and Clarinet Duo, Joseph Petric and Martin Carpentier, and will be premiered in December 2020. In addition to her work as a composer and writer, Kathryn is the General Manager of the Canadian League of Composers, and a Centre Director with Sistema Toronto. Kathryn is a strong advocate for the accessibility of music and art in today’s society and she values the constant pursuit and celebration of knowledge. (www.kathryn-knowles.com)

Donovan Seidle is an accomplished composer, arranger, orchestrator, violinist, teacher and coach. He holds a BMus in Performance and Composition from the University of Calgary and a MMus in Performance from Northwestern University. Since 2003, he has served as one of the three concertmasters of the Calgary Philharmonic Orchestra, which has included soloing and new works commissions. Donovan is an active participant in the municipal artistic community, participating regularly in chamber ensembles and multi-disciplinary projects outside of the orchestra, including having been the Artistic Director of Calgary's own Kensington Sinfonia for 13 years. He travels to contribute with the I Musici Chamber Orchestra of Montreal, and Vancouver Symphony Orchestra. Past projects have included the inaugural YouTube Symphony Orchestra project at Carnegie Hall, the Opening and Closing Ceremonies of the Vancouver 2010 Olympic Winter Games, and the Aspen Contemporary Ensemble, amongst numerous recording sessions, summer festivals and guest-solo spots locally and internationally. (www.donovanseidle.com) 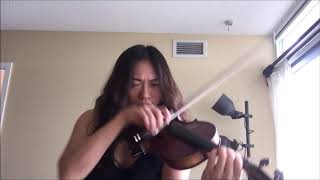